Take me home with you… what a treat!

I am laying myself out on the slab for your entertainment; naked, stripped bare. Grab your scalpel, peel back the skin and go deep, have a good old probe around at my life so far. Yes, you are going to find guts, a fair bit of cheek, maybe even a little bit of gristle, but hopefully, you’ll find a whole lot of heart. 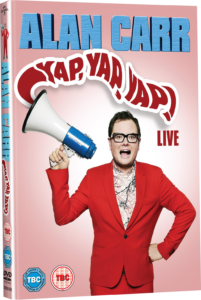 No stranger to yap Alan Carr yapped his way around the UK & Ireland in 2015 in his stand up show ‘Yap, Yap, Yap!’ The BAFTA and British Comedy Award winning comedian, author and chat show supremo returned to his stand up roots with his hilarious take on life. Now Yap it up on DVD!

“A comedian who owns the space he is working in so much, he could put a flag up” The Independent 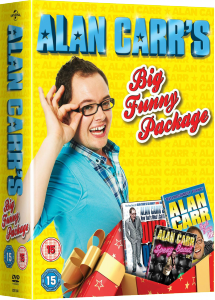 That’s What I Call a Ding Dong.

After a few years of rubbing shoulders with A-list celebrities on his very own chat show, award-winning Alan Carr returns to his stand-up roots in his first major comedy tour and Live DVD in four years. 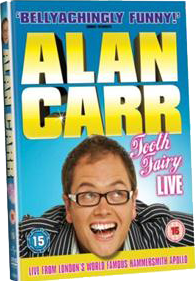 Tooth Fairy Live features Alan Carr, star of Channel 4’s Friday Night Project as he tears the roof off the world famous Hammersmith Apollo on the last night of his magnificent sell out run in May 2007.

Alan is at the peak of his powers sprinkling his very own brand of fairy dust all over the Hammersmith audience. 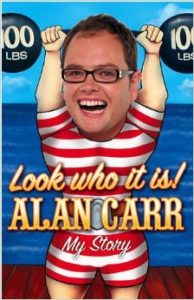 Look Who It Is! Alan Carr – My Story

The brilliantly funny and inimitable Alan Carr tells his life story in his own words, from growing up in a football-mad family in Northampton to his rise to become one of Britain’s best-loved comedians.

‘Puberty had been unkind. Whereas it had come in the night and left the other boys with chiselled, stubbly chins and deep masculine voices, I’d been left with a huge pair of knockers and the voice of a pensioner.’

Hear excerpts from the Look Who It Is! audio CD.

Buy Look Who It Is! Alan Carr – My Story from Amazon, Hive or any great bookshops.

Off The Kerb 1 week ago

Tickets on sale now for an amazing cause 😘 ...

Join Alan Carr for a very special night of comedy. All proceeds will go to Neuroblastoma.org.uk. The lineup includes Joel...